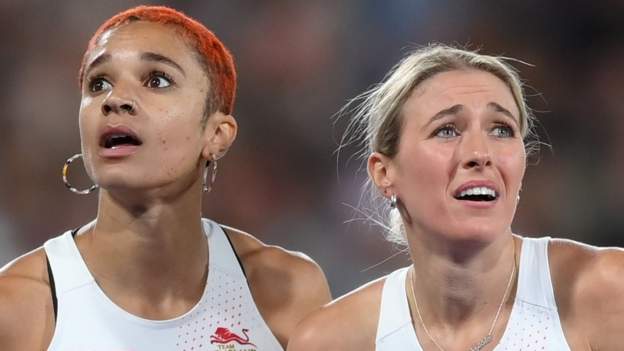 England were denied gold in the dramatic 4x400m Commonwealth relay after officials ruled they committed a lane violation before anchor Jessie Knight took the tightest lead.

Knight initially appeared to have won by a thousandth of a second over Canada’s Kayla Constantine.

But the hosts were denied a fairytale ending to the track and field event after judges found that Judy Williams’ foot had gone off track in the first substitution.

Scotland was promoted to bronze.

Instead of England, their team of Zoey Clark, Beth Dobbin, Jill Cherry and Nicole Yeargin took to the podium in front of the half-empty Alexander Stadium when the awards ceremony took place.

The foul and decision robbed England of one of the Olympic moments when Knight, a specialist in the 400m hurdles, swung her baton arm, pushed her torso across the finish line and beat Constantine by the narrowest margin.

Konstantin’s mediocre personal best was more than a second and a half faster than Knight, but, after waiting to analyze the photos, the England anchor seemed to be doing just the right sprint.

Victoria Ohuruogu, Williams and Ama Pipi, who all played in the individual finals earlier in the day, performed very well and put Knight in a promising position.

But officials were scrutinizing the start of the second leg when Williams’ foot veered out of her lane as the four posed for photos as Alexander Stadium swayed in celebration.

Like Knight’s apparent victory, it seemed like a matter of millimeters. But it was clear and decisive that England, who did not appeal, were stripped of their eighth Olympic gold medal in track and field.