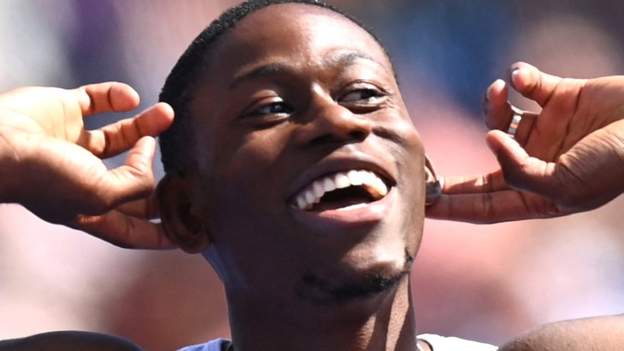 Defending champion England swept gold in the 4x100m relay, with Ojie Edoburun putting in a fine performance at home.

Edoburun was called up after Reece Prescod was forced off through injury and he passed Trinidad and Tobago in 38.35 seconds.

Jona Efoloko, 22, was favored over Adam Gemili in the first leg, with Zharnel Hughes and Nethaneel Mitchell-Blake impressive midway through the race.

In the women’s division, the England women’s team took the silver medal behind Nigeria.

Led by Asha Philip, Imani Lansiquot and Bianca Williams sent the baton into the final 100m to make up for Nigeria.

Anchor Daryll Neita briefly threatened to make a comeback for Nzubechi Grace Nwokocha as the crowd felt a dramatic comeback, but England ran off track.

“I like it more and more. Second time, second medal. There’s a lot of pressure and you want to do well,” he told BBC Sport.

He was waiting to hug Edoburun at the end of the game as the pair urged the crowd to make a louder voice.

“I’m excited to come in and blend in with the boys,” Edobrunn said.

“I don’t want to miss out on this special generation of athletes, I want to bring that confidence to Europeans.”