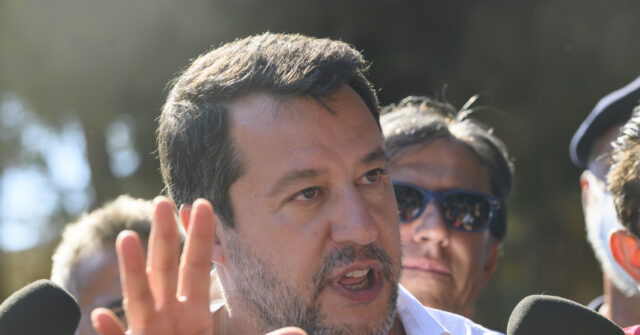 Matteo Salvini, leader of Italy’s populist coalition, has called on the country’s next interior minister to join his party, citing his success in tackling illegal immigration when he took office.

The Lega leader, who served as Italy’s interior minister in 2018 and 2019, visited the island of Lampedusa earlier this week, which has been inundated and overwhelmed by illegal immigrants in recent months.

Salvini said he wanted to close the migrant reception centres and instead set up centres overseas in North Africa to process asylum claims – similar to the policy the British government advocated earlier this year through a deal with Rwanda.

While Salvini did not directly say he wanted to return to the interior minister after the September 25 national elections, he did say he would like a member of his party to take up the role.

“At Viminale I count on a man or a woman from the league [Interior Ministry] Because we wrote the safety statute. I think in terms of immigration, in 2018 and 2019, Italy is a safer, more protected, more European country. I’ll go where the Italians send me,” Salvini said.

Salvini: Only 15% of illegal immigrants will receive refugee status in 2021https://t.co/baLc1d0Qyf

Salvini has been campaigning against illegal immigration since the fall of the technocratic “solidarity” government led by former ECB President Mario Draghi last month.

Earlier this week, Salvini said that only 15 percent of illegal immigrants who arrived in Italy last year were granted refugee status, with the majority of their applications being rejected.

He also noted that the number of illegal immigrants in Italy in July this year exceeded all of 2019.

During a visit to Lampedusa, Salvini commented on the state of the island’s overcrowded immigration reception centre, saying: “I hope this centre will be closed in a few months. There is a lot of money to spend on other things.”

“I want to proudly remember that the number of deaths at sea has been halved under the safety decree. Obviously, the more people leave [for Italy]…the more people die,” he added.